You are here: Home


It was the invention of full-circle tower bell ringing in the early 17th century, that allowed the art of Change Ringing to take off. The bells are hung in a frame allowing them to be swung through 360 degrees which gives control over the time between successive strikes of the clapper. Below is a picture of a bell in the "Up" position, ready to ring: 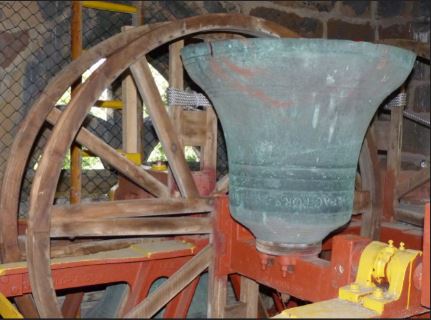 This arrangement allows the order in which the bells are rung to be altered at every stroke producing "changes". A "change" is a sequence that includes all the bells being rung (as in the phrase "ringing the changes") in some order and is the basis of the unique sound that bells rung in this fashion.make. Initially bells are rung in "rounds" - in the order 1 2 3 4 5 6, where 1 is the lightest bell with the highest pitch and 6 the heaviest (lowest pitch), but then different changes can be rung - say 2 1 4 3 6 5, then perhaps 2 4 1 6 3 5 etc The momentum of the bells when they are swinging, which even in a small tower can weigh as much as a small car, means that only small adjustments can be comfortably made between each change, so it is relatively easy to change from 1 2 3 4 5 6 to  2 1 4 3 6 4 (each bell moves one place either the left or right) whereas it would be challenging to change from 1 2 3 4 5 6 to 6 5 4 3 2 1 as the outer bells (6 and 1) would have to jump 5 places. This apparent limitation has become the foundation rule for the creation of bellringing "methods" which stipulate that a bell can only move one place at a time between changes.


Call changes are a means of ringing different changes by giving a set of commands or "calls" to a pair of bells to tell them to swap over. The bells start by ringing rounds (1 2 3 4 5 6) until a nominated "conductor" issues a call. Example, the call "2 to 3" tells the second bell to ring after the 3rd bell (and by implication, the 3rd bell to ring after the first bell, so the change goes from 1 2 3 4 5 6 to 1 3 2 4 5 6. A further call could then be made by the conductor "4 to 5" instructing the 4th bell to ring after the 5th bell (and again by implication, telling the 5th bell to ring after the 3rd bell) so the change would go from 1 3 2 4 5 6 to 1 3 2 5 4 6. The conductor continues to make calls until the bells are back in rounds. This type of ringing is typically used to fill in time (e.g. when waiting for the bride to arrive for a wedding or filling in time before the Sunday morning church service starts. Unhelpfully - and unusually for an organisation that prides itself on standardisation - there are several (at the last count SEVEN) different ways of calling call changes and there is no particular geographical basis for the style of calling used, so one tower may call changes one way and a neighbouring tower may call them in a completely different way, leading to mutual incomprehension when the two groups try to ring together!.


Bells don't produce "music" in the conventional sense. Instead, we ring "methods", which are lists of changes which relate to each other using a set of agreed rules. These rules can vary in complexity from Plain Hunting, through Plain methods, Treble Bob methods, Delight Methods and Surprise Methods. The perfecting of method ringing is the goal of most change ringers.

The simplest method is called "Plain Hunting". Here are the (two) rules for Plain hunting on 4 bells:

To ring this method, each ringer has to memorise what position his/her bell is in at every change. To help with this, a line is drawn to show the path of a particular bell in the method. The ringer has to "learn the line" in order to ring the method. In this example, the line is straight therefore easy to ring and because of this, Plain Hunt is how we introduce beginners to more advanced method ringing.

More advanced methods have kinks in the line - in technical terms, "dodges", "places", "points" and "fishtails". However the process of memorising the method is the same - learn the line. Shown above is a picture of Cambridge Surprise Minor with the path of the 6th bell drawn in. Note that this is just the first "lead" of the method - there are 4 more of these leads to learn making 120 changes in total. We can extend this and other methods using a special call "bob" or "single" which act like a points on a railway track to send us along a different set of changes allowing us to ring for longer. We often use bobs and singles to ring a "quarter peal" - about 45 minutes of ringing - to celebrate a special occasion. On really big occasions, we ring a peal - 3 hours of ringing - but we do this sparingly out of consideration for our neighbours.